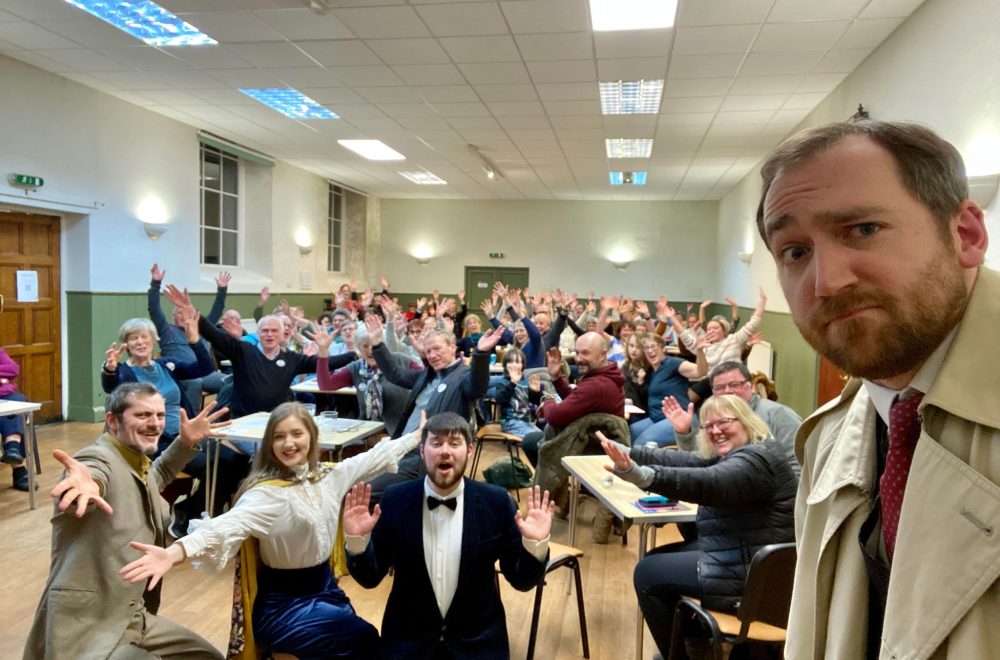 Our Creative Engagement Officer, Kate, has been working with a Young Promoter this Spring term, as part of our scheme. Bella Hubbard from Queen Elizabeth School in Kirkby Lonsdale, has been catching up with Highly Suspect’s cast members, for their tour dates with Highlights, this month. You can read about our Young Promoters Scheme HERE, which is suitable for anyone interested in the Arts aged between 12 – 25 years old. You can still catch up with Highly Suspect’s next shows HERE!

B: Why did you get involved in theatre, and specifically why did you join the cast for the Murder Matinees?

SEB- Because I like to get paid to do silly things 🙂 no really, I love theatre it was always a hobby of mine growing up and being part of a Highly Suspect is a way to continue that.

MIKE: because I was biblically shy as a child and my teachers made me the lead in the school play in a bid to cure that. It worked and I was hooked! Theatre encouraged me to come out of my shell.

JOE: I was sent to a youth theatre on the weekends to give my family some free time and found I really enjoyed it and have been trying to develop myself and my skills ever since. I recently graduated from a degree in performance arts.

LEXIE: I loved theatre ever since I can remember, and was really lucky in that my parents frequently took me to see plays growing up. I studied theatre at university and MA level and now work freelance as a director.

ALL: All 4 have been member of the core group since the inception of the company- we’d worked with each other on previous projects and still love to create new shows. As part of the core group we also get first dibs on characters in new mysteries and it’s always fun to originate new characters.

B: Do these plays get written by a writer, or is it a collaborative effort from the cast?

LEXIE: Mike writes all of our mysteries; he works as a playwright though writing Murder mysteries takes up a lot of his time. The rest of us may help with suggestions and ideas when he hits a sticking point, but ultimately the ideas are all crafted by him.

B: How long would it take to put on a show like this?

MIKE: In terms of the creation of the mystery, it usually involves several months of thinking time to get all the necessary pieces of the jigsaw in place. But once it’s entirely plotted- we know the who’s the hows and the whys (and more crucially how to hide them!), then it usually takes about a fortnight to write.

LEXIE: And then to rehearse it it usually takes about 8 hours over two week.

SEB: This is really down to the fact we have been doing these for so long now that we’re all really turned into how to stage them so quickly, so the rehearsal time has got shorter over the years.

B: Do the shows change in any way depending on what venue you go to?

JOE: not really. We’ve done so many now that we’re quite used to adapting to our environment and performance space. The lack of set and ability to fit everything we need in the boot of one car means we can pretty much do it anywhere.

B: Do you work full time in theatre and performing, or is performing a part time job?

LEXIE: I work full time in theatre but across a number of different projects at any one time as I am a freelancer. I’m mainly a director, and have just finished working on Mischief Theatre’s Magic Goes Wrong as the Assistant Director on the West End and UK Tour versions of the show.

MIKE: I’m not a full time performer though I am a full time creative. I write plays, co-run Highly Suspect with Lexie and also work for a local drama school as a drama tutor.

SEB: It’s part time which I balance with many other things as I enjoy a varied life. I do a lot of theatre based work including as a medical role play training actor and a TB extra, but also work for a gym as an instructor and as a butcher.

JOE: No; it’s part time for me. I work for the NHS supporting peoples’ mental health.

B: How do you prepare for a role when the character is so dependent on the audiences reaction?

JOE: through conversations with the rest of the team I generate the concept for the character and then take some time on my own to explore and make the decisions of how I want to perform it. And then through rehearsal I tweak and alter certain parts before you’re left with the finished version.

SEB: After we’ve had the opportunity to perform a new mystery in front of an audience we can reflect on what parts they responded best to, and lean into that for future editions. That’s the great thing about being able to keep coming back to characters and mysteries;  there’s lots of opportunity to refine and continue that exploration to keep the character fresh.

B: Have you ever had someone solve the mystery very early on? And if yes, how did you work around it?

MICHAEL: sometimes people are able to solve a mystery relatively quickly if all of the pieces of the puzzle are available. However it’s made clear that it is a competitive game and that you should hold onto that information until asked for it. What is more common however is that people think they have the right answer incredibly early- long before they have all the necessary information, and as such it’s a lot of fun watching as their theory falls apart before their eyes and they are forced to start anew.

B: What would be your perfect audience and why?

MIKE: any audience! Providing they are attentive and enthusiastic. I enjoy a nice range of ages, it’s fun to see young sleuths getting involved but ultimately any audience that is prepared to get involved is a good one.

B: How did you deal with the pandemic? Did you do any online performances?

LEXIE: Within the first few weeks of the first lockdown we saw a lot of our bookings for the rest of 2020 get cancelled or postponed. So we quickly pivoted and started to make online work. We created a brand new mystery called The Social Media Murderer that ran for the 3 weeks and which we put up in daily instalments across our website and social media channels. This was free for everyone and we had people getting involved trying to solve it across the world.

B: What were you working on during the pandemic?

We also created an online series of comedy detective storytelling called The Unreliable Narrator, and towards the latter half of the year started doing our mysteries online as well over zoom. The online work kept us going whilst venues were unable to host us, and over 2021 we steadily built up to doing in person events again, with a very busy end of the year. The effects of the pandemic were really difficult, but did push us to find new ways to create and share our work which meant we reached new audiences.

B: Where would be your dream venue to perform at and why?

MICHAEL: i would love to do something at the Criterion Theatre in London as it’s one of my favourite venues. It’s where The 39 Steps had its London run and it’s an underground venue that feels very atmospheric. Prior to that my dream venue was a train, and we achieved that in 2021 when we partnered with Bassenthwaite Lake Train Station to create a bespoke mystery for their train which was the one from Kenneth Brannagh’s Murder On the Orient Express film from 2017. That is a beautiful period venue we feel very lucky perform in on a regular basis now.

SEB: In Blackpool winter gardens there is a venue that looks like a pirate ship and I’d love to do a pirate themed mystery in there.

JOE: Ooh! Following on from that I would love to do one on a boat!

B: As you have such a small cast, how does it work if people don’t get along behind the scenes?

LEXIE: we started as friends and we haven’t yet liked each other! All jokes aside, it’s not a situation that’s cropped up yet which we are very lucky for.

B: Who were your role models growing up and did their careers influence your career choice in any way?

MIKE: I watched a lot of Johnathan Creek, a lot of Murder She Wrote, and a lot of Diagnosis Murder; David Renwick writer of Jonathan Creek was a particular inspiration for his ability to create ingenuously complex mysteries, whilst still keeping them funny.

LEXIE: Yes. Drama was my favourite subject and I did all the extra curricular school plays I could.

MICHAEL: not massively originally, but then after I did that one school play I joined the local am dram society to do my first Panto and was hooked ever since.

JOE: I was at youth theatre from the age of 11 all the way to 18 and studied it at GCSE and A Level and then studied it at degree level.

SEB: not massively. I didn’t study it at school and came to it later in life when I joined the local theatre and that’s where i met the rest of these fine folks and it all snowballed from there.

B: What happens when you don’t get the reaction you want from your audience?

MIKE: I sulk….but then I get to insult them which makes me feel better. I hear of course; we’ve been incredibly lucky in that we’ve never had a bad reaction to a show. The closest we’ve had may be when folks are not as invested in solving it, in which case we have to work extra hard to keep the energy up in the room.

B: If any of you forget lines, would you just improvise and hope the others go along with it?

JOE: Haha. As a group we have a lot of trust with one another and a lot of trust in our abilities To get out of situations. The best part is we’re all of us there to support each other should something go wrong and get things back on track. But that’s the great thing about live theatre.

LEXIE: and working with friends!

B: What was your favourite play to produce?

MIKE: in the context of our mysteries it’s tricky it’s like choosing a favourite child. I have a huge soft spot for An Austentatious Murder because what other mystery  has an audience complete dating profiles where we can actually match them up using an Austen based dating algorithm. However, at a push, because it fulfilled something of a life long ambition, getting to write and perform what is essentially a follow up to one of the great Murder mysteries of all time (Murder on the Orient Express), on the set of the film adaptation is probably top of the list.

JOE: I’m a big fan of The Curse of King Tut our Egytptian Archeology themed one for a number of reasons. I get to have a great ridiculous back and forth with Lexie, and it’s probably our most Scooby Doo esq of our mysteries. Plus I get to wear a rather dashing velvet smoking jacket.

LEXIE: I love The Death of the Great Detective; I really enjoy the character twist on the traditional Mrs Hudson, and it’s a really clever mystery.

SEB: Cluedunnit because I get to play the marvellous gregarious Colonel Helman Mayo, who is one of my favourite characters.